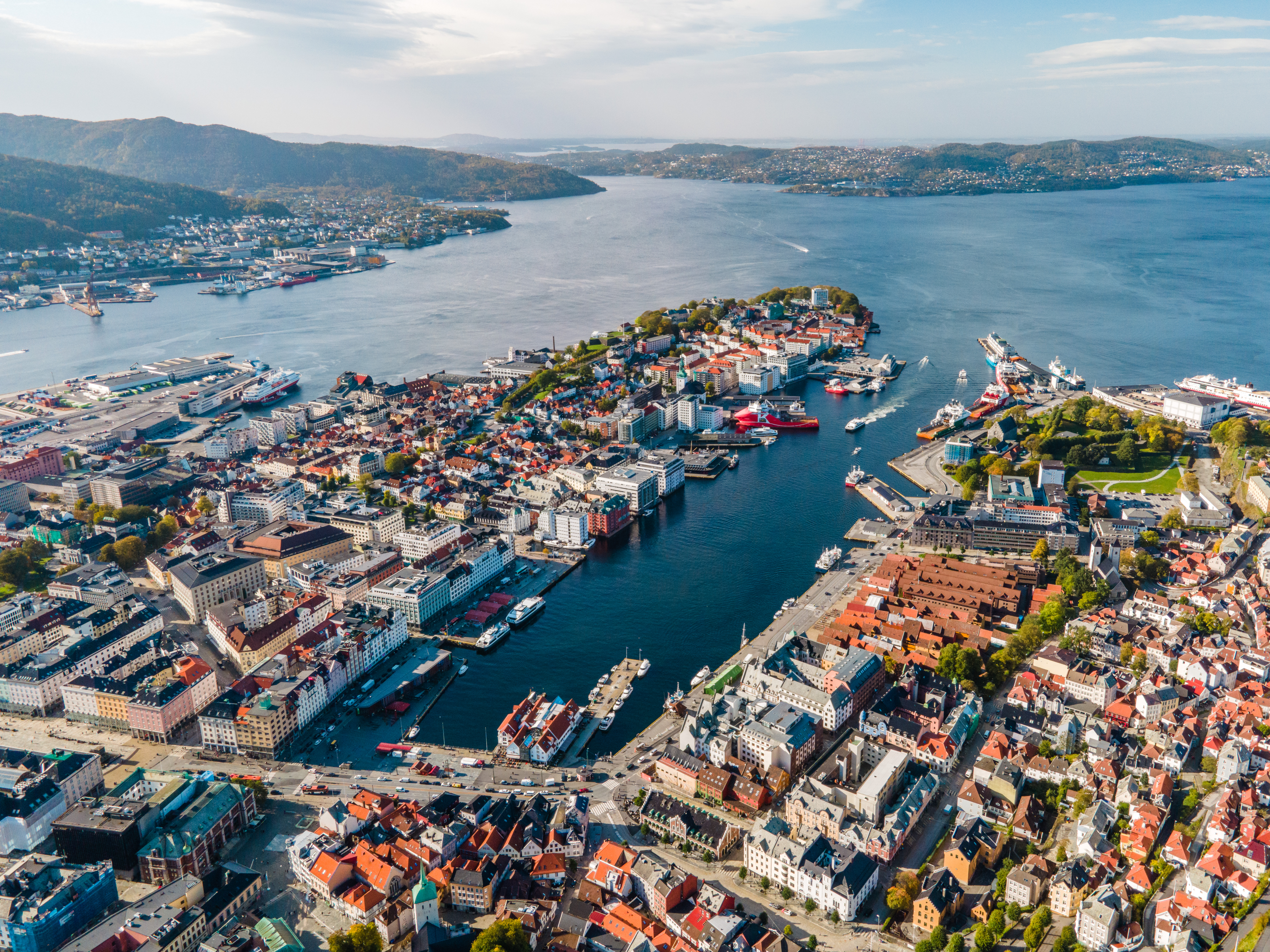 The capital of fjord Norway nestled among 7 mountains

Even though Bergen is the second-largest city in Norway, it has a small town charming character. In this west coast peral, you find small cobblestone streets, houses that cling on to the mountain side and an abundance of local shops, cafes and small shopping streets.

Bergen is sheltered from the North Sea only by a number of islands. It is situated 60 degrees north - the same latitude as Saint Petersburg. The city is known to be the most hilly and mountainous in all of Norway - meaning a view of the city is always close by.

During the Middle Ages, Bergen held an important seat in the Hanseatic League as well as being the capital city, a heritage that still is visible in the beautifully preserved and iconic wooden houses of Bryggen, the undisputed king of motifs in the city centre. Almost equally famous is the fish market - a mere stone throw from the hanseatic wharf.

Bergen was designated European City of Culture in year 2000, and for good reasons. The city has fostered famous composers like Edvard Grieg, Ole Bull and Harald Sæverud. In modern times Kygo and Alan Walker continue to put the city on the international map.

Thanks to the fact that 10 percent of the people who live here are students, you can be sure there is always lots happening.

Once you break the spell cast by Bergen, scores of adventures and attractions are waiting at its doorstep. It is after all the gateway to the fjords - which have been included on UNESCO’s World Heritage List. Both the Sognefjord (the world’s longest and deepest fjord) and the Hardangerfjord can be reached within hours departing from the city centre.

If Bergen is on your travel itinerary, you have come to the right place. Stick with us and have fun adventuring!

Cruise on the Hardangerfjord and explore the mighty Vøringsfossen waterfall
From NOK 1 340,-

3-hour boat cruise through Mostraumen and Osterfjord
From NOK 680,-

Experience waterfalls, the rural fjord village of Vik and a cruise on the Sognefjord
From NOK 1 950,-

A scenic round trip fjord cruise between Bergen and Flåm through Sognefjord
From NOK 1 400,-

Cruise on Hardangerfjord, explore an array of small villages and pay a visit to picturesque Eidfjord
From NOK 890,-

Board a postal boat for an unique tour to remote islands and small communities at Bulandet
From NOK 1 690,-

Put your ski skills to the test and go summer skiing at Folgefonna Glacier
From NOK 1 390,-

Enjoy a fjord cruise out of Bergen and experience an arm of the grand Jostedalsbreen glacier
From NOK 1 980,-

Cruise on the Hardangerfjord and explore the mighty Vøringsfossen waterfall
From NOK 1 340,-

Fjord cruise from Bergen to Rosendal in the heart of beautiful Hardanger
From NOK 824,-